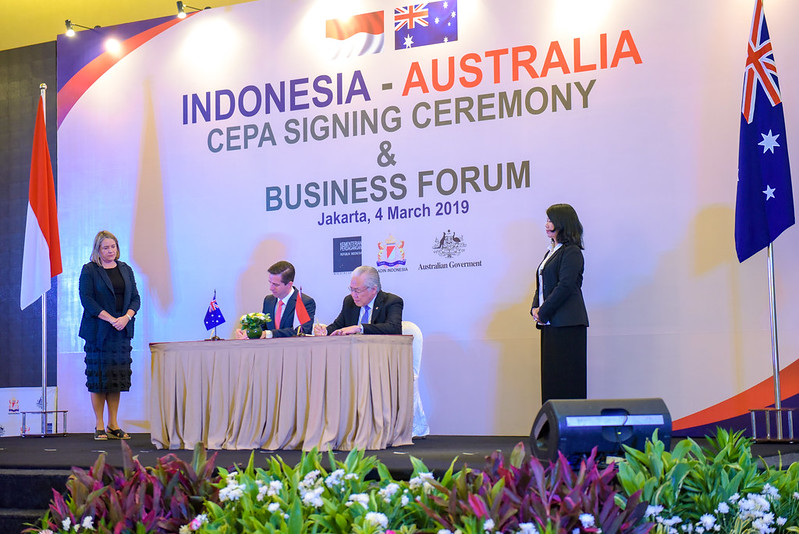 The negotiations were first launched in late 2010 and were on hold from November 2013 until being reactivated in March 2016. After completing 12 rounds of negotiations, and a number of Chief Negotiators’ meetings during the almost nine year-long negotiation process, Indonesia and Australia declared on 31 August 2018 that the negotiations have been substantively concluded. At long last, the Agreement is today signed.

The signing of the Agreement reflects a deeper level of engagement in the already long-established economic relations between Indonesia and Australia. The Agreement aims at a more comprehensive, high quality and mutually beneficial economic partnership between Indonesia and Australia which covers trade in goods (including non-tariff measures, rules of origin, customs procedures, trade facilitation, sanitary and phytosanitary, technical barrier to trade), trade in services (including professional services, financial services, telecommunication services, and movement of natural persons), electronic commerce, investment, economic cooperation, competition, and legal provisions.

The Agreement will eliminate 100% of Australian tariffs, whereas 94% of Indonesian tariffs will be gradually eliminated. Major industrial sectors in both countries that will benefit from this elimination of tariffs include automotive, textile, footwear, agribusiness, food and beverage, and furniture. Furthermore, the Agreement incorporates provisions on non-tariff measures (including sanitary and phytosanitary, and technical barrier to trade), as well as trade facilitation and customs procedures which will ensure a more robust and transparent economic environment.

In services and investment, both Indonesia and Australia will gain better access, particularly on movement of professionals. The Agreement will also provide a stronger protection of investments, and promote a more stable and predictable business climate which allow greater flows of foreign direct investment particularly in sectors such as mining, energy, iron and steel, finance, higher and vocational education, tourism, health, and agribusiness.

The unique feature reflecting the strong determination of both countries to establish a true partnership through this Agreement is the economic cooperation that will foster human capital development, facilitate innovation, promote integration into the global value chains and enhance cooperation in powerhouse sectors, for instance by means of establishing a skill

According to Statistics Indonesia, total bilateral trade between Indonesia and Australia was recorded at US$ 8.6 billion in 2018. Indonesia’s main exports to Australia include petroleum, furniture, tires, display panel, and footwear, while Indonesia’s main imports from Australia include wheat, petroleum, live cattle, coal, and raw sugar. The Indonesian Investment Coordinating Board reported that the total investment from Australia to Indonesia in 2018 reached to US$ 597 million. These figures are expected to increase once the Agreement comes into force.